Last night, I was half asleep and half drunk in my bed watching the Biggest Loser finale on my laptop which was perched eye level to me on a pile of unopened Amazon.com shipments when I decided to check my mail one more time before I passed out. Our old friend Theda Boo let me know via facebook that my Captain, our Captain was no longer with us. I smacked sleeping Josh on the arm and urgently frowned in his face. “Captain Beefheart is dead! Captain Beefheart is dead!”

“Are we going to tell Jonah?”

“I don’t think he should know.”

My smile is stuck. 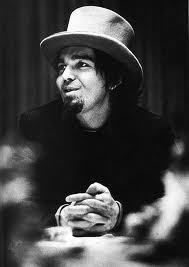 Two things: there is an non-erasable well of phrases and stances etched into my brain by Don Van Vliet and Captain Beefheart was the best personality of all time.

I love him because:

I love how you can tell someone you love Trout Mask Replica and they will be like “This isn’t actually music and you are just listening to this to be obscure and difficult.” and you can then hand that person a copy of Safe As Milk and tell them to go fuck themselves. It’s like Picasso: standard awesomeness and then next-level awesomeness.

My memories of Beefheart:

I had a copy of Safe as Milk on tape in my car in Japan. I listened to it 70 percent of the time I was driving.

I first heard Trout Mask Replica all the way through after being awake for more than thirty hours. My friend John and I had been out all night at clubs in Tokyo. He lost his keys. We went back to said dumb clubs at 5 am and hoped anyone had his keys. They didn’t. We took the subway home. He made me stop at a musical equiptment store. I crawled under a display table and curled up into the fetal position. He got embarrassed and I got to go home. When I got there, I put Trout Mask Replica on a small cd  player next to my head. I fell in love and the tweety bleary procession of it all really fit with my reality of sleep deprivation.

My sister Johanna and I then spent months studying it. We imagined living inside the pictures.

“Is he just pointing a lamp out into the world in this one?”, she asked.

We repeated the phrases A squid eating dough in a polyethelene bag is fast and bulbous, got me? and That’s right, the Mascara Snake, fast and bulbous! and We run on beans, laser beans! I wished my name was Zoot Horn Rollo.

Later that year, we were visiting Ohio and my older sister Susan had a boyfriend who dug through my travel cd case.

“You know, Captain Beefheart has normal music, too” he said. Of course I knew this and I secretly wrote him off, but he did take us to a store in Columbus called Magnolia Thunderpussy (!) because it was the first day the Captain Beefheart collection was coming out on cd. I couldn’t afford it, but I begged the clerk to allow me to touch it. It was wrapped in pink plastic.

My son is weird and my son is thorough. He got an iPod for his birthday and learned how to read this year. He got interested in our iTunes list. He wanted to go alphabetically through it. He got to the song Abba Zabba (all three versions that we have!) and fell in love. There was a week over here where Jonah could reliably be found in his room dancing and singing along to that song. Then, he got into watching the Ice Cream for Crow video on youtube. He’s five. He discerned that Captain Beefheart lived outside in the desert and decided he wanted to write him a letter. He made him some drawings and wrote some words on them. I had a hell of a time figuring out where to send them, so they are “filed” away somewhere in the laundry basket full of artwork in my kitchen. Captain Beefheart is the only person Jonah has ever wanted to write to. 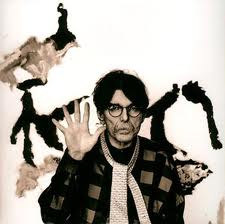 This post is hastily done and ill conceived. I am in a flurry of making buckeye balls and just trying to deal. Nonetheless, if you have a moment, watch this documentary. It’s really good and not on Netflix last time I checked (it’s in 6 parts on youtube). The one on Netflix is not that great.